Why does Nikola Broadband have data caps (also known as monthly download limits) when so many other Internet Service Providers do not?

Let us first explain that most local (and many nationwide) ISPs do have monthly download limits, but they just don’t like to advertise them because that turns away customers. They can get away with this because only a small percentage of customers even come close to reaching their monthly limit, so they just don’t say anything about a monthly limit until a specific customer goes over the limit — then they contact that customer about the download limit. Here at Nikola Broadband we believe in telling you right up front about our monthly download limit.

However, back to the original question of why Nikola Broadband (or any ISP, for that matter,) would put a monthly download limit on their loyal users.

The reason is that ISPs all pay for the Internet downloads of their customers. Local (small) ISPs pay more for their Internet data as well. The more you download, the more your ISP has to pay to their upstream commercial Internet provider.

So you can see that if ISPs put no limit on customer downloads, then the customer could download enormous quantities of data and end up costing their ISP far more then they were even paying to their ISP in their monthly bill. Obviously no business can stay in business by selling for cheaper then they buy — they have to pay their electric bill too!

Those ISPs which actually have no monthly download limit have no choice except to recover their loss on a small percentage of high users by passing the cost on to all the other users. We here at Nikola Broadband do not believe it’s fair for one person to have to pay for another’s Internet usage.

If another local lSP says that they have no monthly download limit, go ahead and ask them “So what would happen if I downloaded as fast as I could all day every day of every month” and see what they say. Explain that if you downloaded at 3mbit/second around the clock for 30 days it would total to 970 gigabytes, and ask them how much 970 gigabytes costs them.

It may be true that large national ISPs really have no monthly download limit. This is because they purchase so much data that they get a cheaper rate, therefore costing them much less when a customer downloads enormous quantities of data. A large nationwide ISP may also have cheaper monthly rates, but we’re certain they can’t beat Nikola Broadband for local engineers who know their network and care about their customers!

We have developed a way for you to monitor your monthly usage.  Click on this link> My Usage
Don’t forget to bookmark it for easy access.

Click below for an example of our “My Usage” page with descriptions: 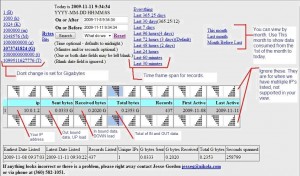 The location could not be found.
Detailed Current Weather from the Nikola Weather station on Bell Hill

Current Weather from our Weather Station