Malware
Short for “malicious software”, is software to help hackers disrupt users computer operation, gather sensitive information, or gain unauthorized access to a computer system. While it is often software, it can also appear in the form of script or code

Botnets
A botnet is an army of compromised machines, also known as “zombies,” that are under the command and control of a single “botmaster.” The rise of consumer broadband has greatly increased the power of botnets to launch crippling denial of service (DoS) attacks on servers, infect millions of computers with spyware and other malicious code, steal identity data, send out vast quantities of spam, and engage in click fraud, blackmail, and extortion.

An example of a Botnet filter action:
You go to a web site that, unbeknownst to the site owner, has been hacked.  This site redirects you to a malware site.  This malware may simple cause an ad pop-up, or it may try to infect your computer.  The Botnet filter compares all of your computer’s traffic to Cisco’s list of malware and botnet sites.  If the attempted connection is in the list, the connection is blocked.

If your computer tries to contact a known Botnet command and control site, the connection is blocked and a more severe log entry is created.  This means that your computer may be infected and we will notify you. 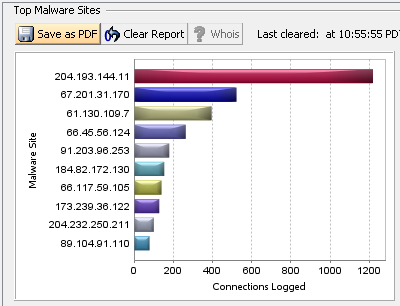 DNS (Domain Name System) is an Internet service that converts user-friendly domain names into the numerical Internet protocol (IP) addresses that computers use to talk to each other. When you enter a domain name, such as nikolabroadband.com, in your web browser address bar, your computer contacts DNS servers to determine the IP address for the website.  DNS Changer malware typically redirects you to a site masquerading as the intended site.

The location could not be found.
Detailed Current Weather from the Nikola Weather station on Bell Hill

Current Weather from our Weather Station